How to actually get a full beard without any sparse patches? There are many ways to obtain the beard of your dreams.

Why are some men growing a patchy beard?

Beards are a sign of virility, and in recent years they have been fashionable to grow one. In fact, it has become practically compulsory for modern man to have facial hair to keep up with the times. The 'lumberjack' has dominated male styles for the last decade, and it doesn't seem like it's going to get out of style any time soon. A lot of men want to grow a full beard to keep up with this fashion trend. Moreover, in contrast to the 'metrosexual' movement of the early 2000s, which saw men adopting a more androgynous theme, the search for virility is at the core of a modern look for men. Plus, beards are the most noticeable and natural sign of masculinity out there. In addition, beards open up a whole world of customization choices, such as long beards, 3-day beards, mustaches in all sizes, and more.

Not all, however, can have the ideal beard. Occasionally, they can have bald patches. These bald patches can be caused by a number of factors. Genetics is the biggest cause of scarce beard hair. In reality, each man is given a different amount of hair. In addition, young patients may not have reached their hormonal peak (25-30 years of age) at which men have reached their optimum hormonal potential for hair development. A sparse beard can also be associated with metabolic problems. In reality, vitamin, amino acid or mineral deficiencies can alter the growth of the beard (just like with head hair). External factors can also be at play, such as stress, smoking, medical care or lack of sleep.

How can you solve patchy beard hair?

Beard grafting is a powerful and long-lasting cure for the treatment of patchy beard growth. Beard hair implants can be performed on men whose hair is not properly grown or whose beard has bald spots, giving it an imperfect look.

The beard grafting will fill the gap in the beard and can be done as an outpatient procedure under local anaesthetics. The positioning of the beard implant can take between two and three hours.

This treatment uses the FUE (Folicular Unit Extraction) technique, which does not cause any scarring or damage. The surgeon will extract very fine hair from the neck nape. This hair and beard hair have a similar composition and act in the same way in terms of speed of growth. The size of the grafting area will depend on the size of the bald area of the beard.

Our solutions to fix the growth of patchy beard 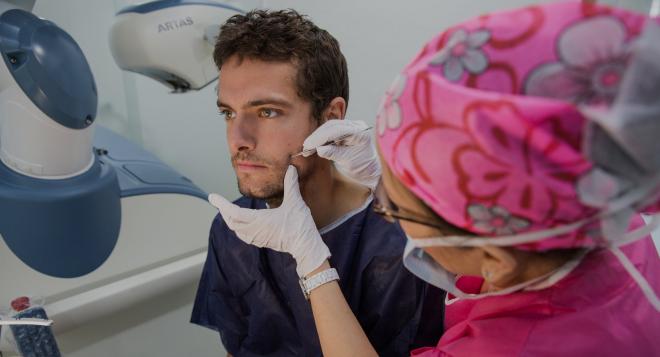 Access +971 44 36 74 24
Send us a message
X
Information about cookies
By continuing your visit to this site, you agree to the use of audience measurement cookies from our website in order to make statistics of visits to our site.
To learn more and set cookies
click here
X
When you browse our site, information may be recorded or read in your device, subject to your choice.
Do you accept the deposit and reading of cookies to analyze your browsing and allow us to measure the audience of our website?